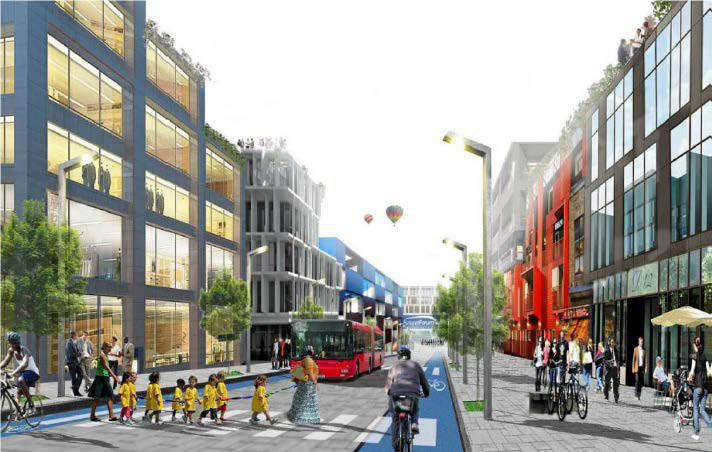 The Furuset project aims to combine the physical upgrading of the neighbourhood centre of Furuset from the 1970’s with high environmental ambitions. The renewal includes the infrastructure taking into consideration energy, waste and water, traffic, green landscaping and social issues, the extension of the number of residential units and work places, and the development of an attractive urban space. The exact number of the planned 1 700 – 2 300 housing units and 2 000 – 3 400 work places depends on the realization of a covered E6 highway (“highway lid”), which was controversial when discussed during the planning phase and a final decision has not yet been made. The estimated timeframe for completion is 2030.

Furuset is a multi-functional local neighbourhood centre in the eastern part of Oslo. The refurbishment area incorporates about 3.800 residential units (90% are in apartment blocks) and 1 500 workplaces. Furuset has good transport connections with two metro stations, 4 bus lines and close proximity to the E6. The local centre offers a broad range of shopping and service facilities. An ice stadium, a school and kindergarten complements the social infrastructure in the neighbourhood.
The main stakeholders involved are the municipality with several departments, the administration of the city district Alna and the FutureBuilt Programme from public side. The planning department was the leading actor during the planning phase. The climate department (Klimaetat) took over in 2016. Several consultant agencies participated in different stages of the process. Other stakeholders involved are 12 housing cooperatives, private landowners, the transportation agency Ruter and the energy utility company Fortum Oslo Varme. Furuset lies within Fortum Oslo Varme’s concession area for district heating.

The overall goal – to develop a climate-friendly and attractive neighbourhood – incorporates several sub-goals such as the creation of attractive urban spaces, strengthening of the green infrastructure with blue-green connections, a broad and varied supply of residential units, and a well-functioning traffic hub. These goals are facilitated by area regulation adopted in 2016. In addition, the development of a micro energy system aims to establish a local energy system with zero-emissions.

In addition to the area regulation, a separate action plan describes the planned measures:

The Norwegian University of Science and Technology (NTNU) is the host and leads the Centre together with SINTEF Building and Infrastructure and SINTEF Energy.